Medical knowledge > Most Influential Heterocycles In The World

Regardless of functionality and structure, every carbocyclic compound may be converted into various heterocyclic analogs by just replacing one or more carbon ring atoms with a different element. As a result, heterocycles have offered a platform for the exchange of research in various areas including but not limited to pharmaceutical, medicinal, analytical, and organic chemistry of heterocyclic compounds.

The major examples of heterocyclic compounds are most drugs, nucleic acids, the majority of synthetic and natural dyes, and a majority of biomass such as cellulose and related materials.

Even though heterocyclic compounds may be organic or inorganic compounds, most have at least one carbon. These compounds can be classified according to their electronic structure. Saturated heterocyclic compounds behave in the same way as acyclic derivatives. As a result, tetrahydrofuran and piperidine are conventional ethers and amines with modified steric profiles.

The study of heterocyclic chemistry, therefore, focuses mainly on unsaturated derivatives and applications involve unstrained five as well as six-membered rings. This includes furan, pyrrole, thiophene, and pyridine. The next large class of heterocyclic compounds is fused to benzene rings, which for furan, pyrrole, thiophene, and pyridine are benzofuran, indole, benzothiophene, and quinoline, respectively. If two benzene rings are fused, this results to another large family of compounds, which are dibenzofuran, carbazole, dibenzothiophene, and aridine. Unsaturated rings may be classified based on the participation of a heteroatom in the pi system, conjugated system.

Heterocyclic compounds with three atoms in a ring are way more reactive courtesy of the ring strain. Heterocycles containing one heteroatom are generally stable. The ones containing two heteroatoms occur, in general as reactive intermediates.

Oxiranes, also known as epoxides are the most common 3-membered heterocycles. Oxiranes are prepared by reacting peracids with alkenes, with good stereospecificity. Oxiranes are more reactive than unsaturated ethers courtesy of the high angle strain of the 3-membered ring. Addition reactions that proceed by a nucleophilic and electrophilic opening of the ring are the most general reaction class.

A reaction of this kind is involved in nitrogen mustards’ pharmacological action that was among the very first anticancer drugs developed. Closure of intramolecular ring like in the case of anticancer agent mechlorethamine forms an intermediate aziridium ion. The formed biologically active agent attacks proliferating cells including cancer cells through inhibition of their DNA replication. Nitrogen mustards have also been used as anticancer agents.

Commercially aziridine and oxirane are essential bulk industrial chemicals. On massive scale production of oxirane, ethylene is directly reacted with oxygen. The chemical reaction, which is the most characteristic of these 3-membered rings, is that they are susceptible to attack by nucleophilic reagents to open the ring as shown below:

The most common three-membered heterocyclic compounds with one heteroatom include:

Various methods of preparation of 4-membered rings heterocycles are shown in the diagram below. The process of reacting an amine, thiol or 3-halo with a base is typically effective but with mediocre yields. Dimerization and elimination are typical side reactions. Other functions may also compete in the reaction.

In the first example, cyclization to an oxirane always compete with formation of thietane, but the higher nucleophilicity dominates especially if one uses a weak base.

Reactions of 4-membered heterocyclic compounds also demonstrate ring strain influence. The following diagram shows some examples. Acid-catalysis is a typical feature of various ring-opening reactions demonstrated in examples 1,2, and 3a. In reaction 2 of thietane, sulfur undergoes electrophilic chlorination leading to the formation of chlorosulfonium intermediate and substitution of ring-opening chloride ion. In reaction 3b, strong nucleophiles are also seen to open the strained ether. Beta-lactones’ cleavage reactions may happen either by acid-catalyzed acyl exchange as seen in 4a. It can also take place by alkyl-O rupture by nucleophiles like in 4b.

Example number 6 shows an interesting phenomenon of intramolecular rearrangement of the ortho-ester. Reaction 6 shows Beta-lactam cleavage of penicillin G which explains the enhanced acylation reaction of the fused ring system.

The most useful heterocyclic compounds with 4-membered rings are two series of antibiotics, the cephalosporins, and penicillins. The two series contain azetidinone ring which is also known as Beta-lactam ring.
Many oxetanes are under investigation as antiviral, anticancer, anti-inflammatory, and antifungal agents. Oxetanones, on the other hand, are mostly applied in agriculture as bactericides, fungicides, and herbicides and in the manufacturing of polymer.
Parent thietane was found in shale oil while its odoriferous derivatives work as scent markers for European polecats, ferrets, and minks. Thietanes are applied as fungicides and bactericides in the paint, as iron corrosion inhibitors, and in the manufacturing of polymers.

5-membered rings with a single heteroatom

Thiophene, furan, and pyrrole are the parent aromatic compounds of 5-membered rings heterocycles. Here are their structures:

The saturated derivatives of thiophene, furan, and pyrrole are thiophane, tetrahydrofuran, and pyrrolidine respectively. Bicyclic compounds made of thiophene, furan, or pyrrole ring fused to a benzene ring are known as benzothiophene, benzofuran, isoindole (or indole) respectively.
Nitrogen heterocycle pyrrole typically occurs in bone oil that is formed by decomposition of proteins through strong heating. The pyrrole rings are found in the amino acids such as hydroxyproline and proline that are components of various proteins present in high concentrations in structural protein of ligaments, tendons, skin, and bones and collagen.
Pyrrole derivatives are found in the alkaloids. Nicotine is the most commonly known pyrrole that contains alkaloid. Hemoglobin, myoglobin, Vitamin B12, and chlorophylls, are all formed by joining four pyrrole units in a large ring system called porphyrin, like that of chlorophyll B demonstrated below. 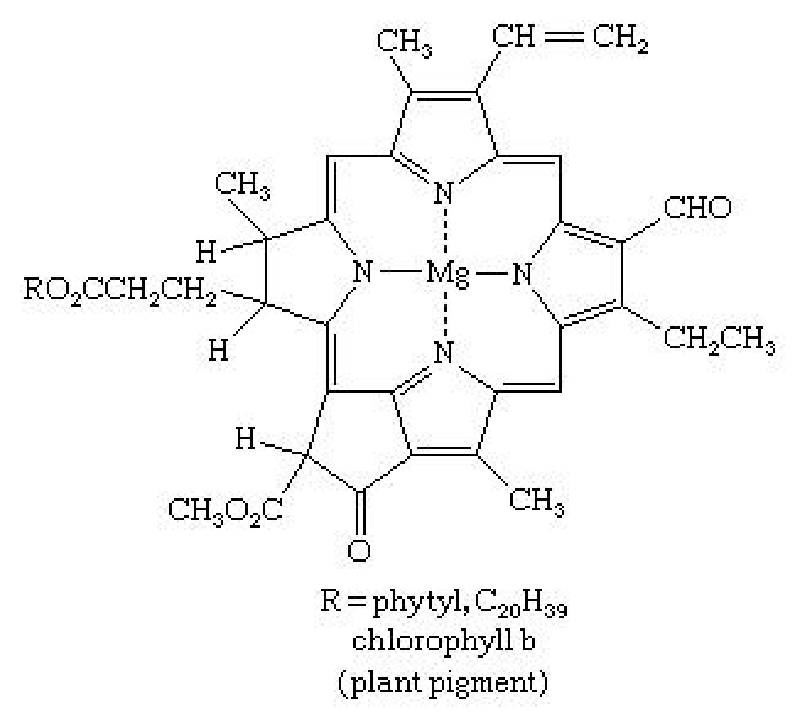 Bile pigments are formed through decomposition of porphyrine ring and have a chain of 4 pyrrole rings.
Preparation of 5-membered ring heterocycles
Industrial preparation of furan proceeds as shown below by the way of aldehyd, furfural, that is generated from pentose that contains raw materials such as corncobs. Similar preparations of thiophene and pyrrole are shown in the second row of equations.
The third row of equation one demonstrates the general preparation of substituted thiophenes, pyrroles, furans from 1,4-dicarbonyl compounds. Many other reactions leading to formation of substituted heterocycles of this type have been started. Two of these procedures have been shown in the second and third reaction. Furan is reduced by palladium-catalyzed hydrogenation to tetrahydrofuran. This cyclic ether is a valuable solvent which can not only be converted to 4-haloalkylsulfonates but also 1,4-dihalobutanes that can be used to prepare thiolane and pyrrolidine.

Some pyrazoles occur naturally. Compounds of this class are prepared by reacting 1,3-diketones with hydrazines. Most synthetic pyrazole compounds are used as medicine and dyes. They include fever-reducing analgesic aminopyrine, phenybutazone used in arthritis treatment, the fibre dye and yellow food colour tartrazine, and majority of dyes used in colour photography as sensitizing agents.

There also exist a large group of five-membered ring compounds with at least 3 heteroatoms. One example of such compounds is dithiazoles which contain a nitrogen atom and two sulfur.

The nomenclature used in monocyclic nitrogen-containing 6-membered ring compounds is here below. Positions on the ring for pyridine are shown, Arabic numerals are more preferred to Greek letters, even though both systems are used. Pyridones are aromatic compounds courtesy of contributions to resonance hybrid from charged resonance forms as demonstrated for the 4-pyridone.

Two major coenzymes involved in various crucial metabolic reactions in cells, NAD (also known as coenzyme1) and NADP (also known as coenyme II), are derived from nicotinamide.
The majority of alkaloids contain a piperidine or pyridine ring structure, among them piperine (constitutes one of the sharp-tasting contents of black and white pepper) and nicotine. Their structures are shown below.

Pyridine which was once extracted from coal tar but is now prepared catalytically from ammonia and tetrahydrofurfuryl alcohol is a crucial intermediate and solvent used to manufacture other compounds. Vinylpyridines are crucial monomer building blocks of plastics, and fully saturated piperidine, pyridine are used as chemical raw material and rubber processing.

6-membered rings with 2 or more heteroatoms

The 3 monocyclic six-membered ring heterocycles with 2 nitrogen heteroatoms (diazines) are numbered and named as shown below.

Maleic hydrazide is a pyridazine derivative used as a herbicide. Some pyrazines such as aspergillic acid occur naturally. Here are the structures of the aforementioned compounds:

Pyrazine ring is a component of various polycyclic compounds of industrial and biological importance. Important members of pyrazine family are phenazines, alloxazines, and pteridines. Pharmacologically and biologically, the most crucial diazines are pyrimidines. Cytosine, thymine, and uracil are the 3 of the 5 nucleotide bases which constitute the genetic code in RNA and DNA. Below are their structures:

Vitamin thiamin have a pyrimidine ring and in addition to synthetic barbiturates including amobarbital are commonly used drugs. Morpholine (parent tetrahydro-1,4-oxazine) is produced on large scale for use as a fungicide, corrosion inhibitor, and a solvent. Morpholine ring is also found in the sedative-hypnotic drug trimetozine and some fungicides like fenpropimorph and tridemorph. Here’s the structural formula for morpholine: 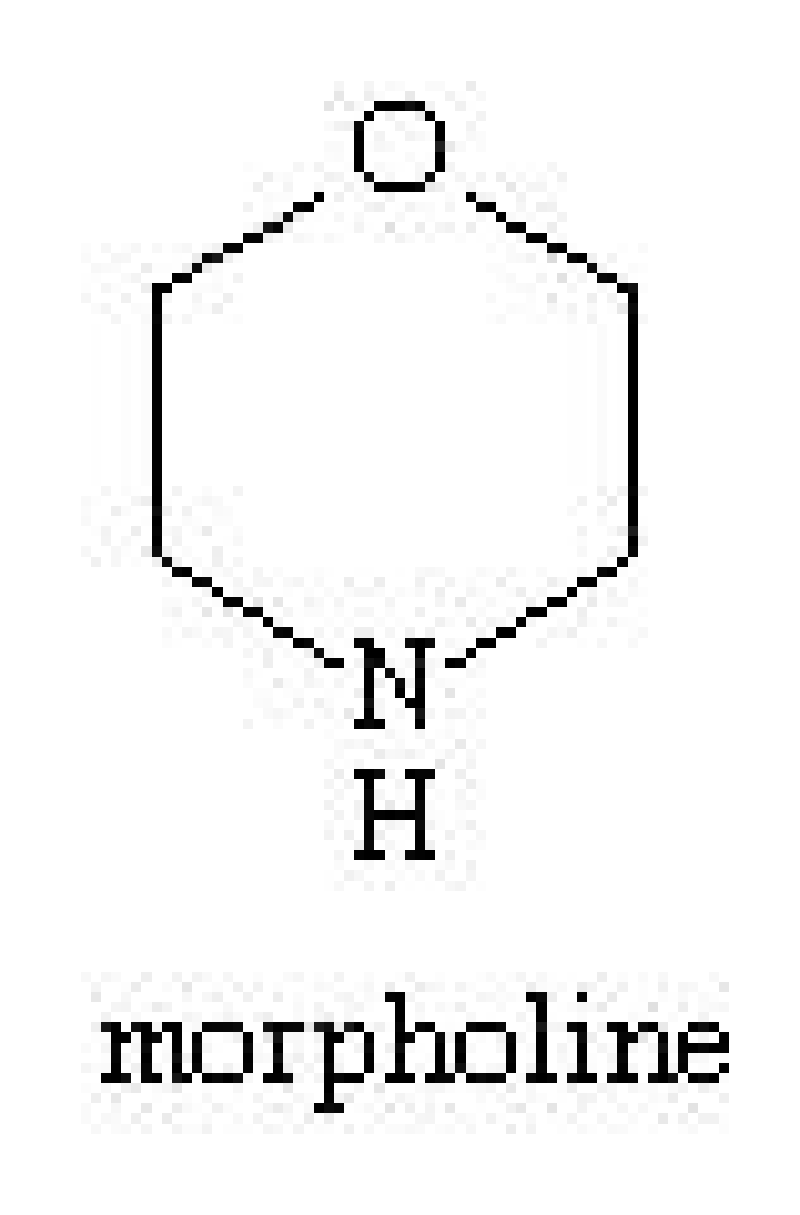 As the ring size increases, the variety of the compounds that may be obtained by varying the location, type, and the number of heteroatoms increases enormously. However, the chemistry of heterocycles with 7-membered rings or more is less developed than that of 6 and 5-membered ring heterocyclic compounds.
Oxepine and Azepine rings are crucial constituents of various naturally occurring metabolic products of marine organisms and alkaloids. The azepine derivative known as caprolactam is commercially produced in bulk for use in the manufacture of nylon-6 as an intermediate and in production of synthetic leather, coatings, and films.
7-membered heterocyclic compounds with two or one nitrogen atom in their ring are structural units of broadly used psychopharmaceuticals Prazepine (tricyclic antidepressant) and tranquilizer diazepam also known as valium.

Examples of heterocyclic compounds in this class include azocane, oxocane, and thiocane with Nitrogen, oxygen, and sulfur being the respective heteroatoms. Their respective unsaturated derivatives are azocine, oxocine, and thiocine respectively.

Examples of heterocyclic compounds in this class include azonane, oxonane, and thionane with Nitrogen, oxygen, and sulfur being the respective heteroatoms. Their respective unsaturated derivatives are azonine, oxonine, and thionine respectively.

Heterocycles are useful in several areas of life sciences and technology. As we have already seen in our discussion, many drugs are heterocyclic compounds.